My home computer died last week, as a result of what appears to have been a suicide pact between my CPU and my motherboard. That’s my excuse for the lack of recent updates, anyway.

But while I didn’t have a chance to do any blogging, I did have a good excuse to rebuild my computer. Here’s the result: 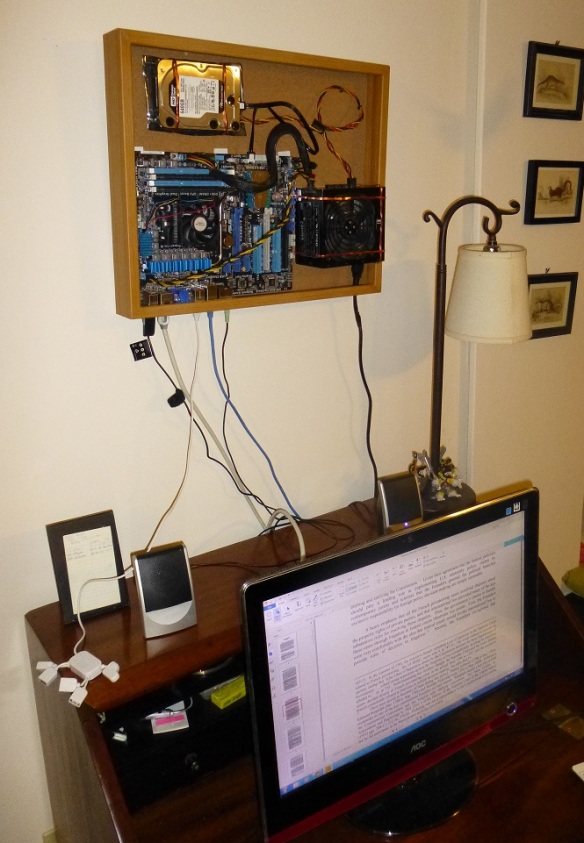 Space-saving, plenty of airflow, and no more reaching down to plug or unplug USBs. Also economical — it saves you from the expense of having to buy both a computer case, and also a picture to hang over your desk.

Of course, if I tried to make another one, there are definitely a few things I would do differently. Like use something other than a box cutter to cut out an opening for the front panel:

A box cutter can cut through wood, as it turns out. It just takes a really, really long time.

There is one small problem with having a wall-mounted computer that I didn’t consider before I put it up, though. And that’s the fact that my cat is convinced the computer fan and the wires were intended to be fascinating new toys for him to play with.

Maybe I’ll get some pigeon spikes for the top of my desk, that should fix the issue. Otherwise I’m pretty happy with it, as a prototype. There’s even room left over on the board for a new graphics card if I want to upgrade later.