Is there a connection between the increasingly anti-Muslim tenor of American political discourse and the persistent rumors of Obama’s secret Islamic faith?

There’s no way to empirically prove the connection that I can think of, but I do wonder if the paranoia over Obama’s religious beliefs and location of birth have contributed to the current hostility towards Islam, culminating in the “Ground Zero Mosque” controversy.

Under Bush, the hysteria over Muslims as a whole was not as prominent. The hysteria over Muslim terrorists was pretty high, yes, but there was a firm distinction drawn between “Muslims” and “terrorists.” Bush’s political message was, in general, focused on outreach to and inclusion of the Muslim majority while characterizing Al-Qaeda and other terrorists groups as “a fringe movement that perverts the peaceful teachings of Islam”:

I also want to speak tonight directly to Muslims throughout the world. We respect your faith. It’s practiced freely by many millions of Americans, and by millions more in countries that America counts as friends. Its teachings are good and peaceful, and those who commit evil in the name of Allah blaspheme the name of Allah. The terrorists are traitors to their own faith, trying, in effect, to hijack Islam itself. The enemy of America is not our many Muslim friends; it is not our many Arab friends. Our enemy is a radical network of terrorists, and every government that supports them.

For Obama, however, such inclusiveness and tolerance comes at a much higher political cost and meets with greater resistance and anger. Although he did publicly defend the building of Park51 — a step I was surprised to see him take, and do give him credit for — it came at a very high cost in terms of the poll numbers.

Bush could defend the rights of Muslims and be thought of a just and respectful man for it; but no one believed Bush was secretly born in a Muslim nation, and he was overwhelmingly known to be a Christian. He also took a hawkish approach to foreign policy and national security, and had the Republican branding on both those points to back him up.

Although Obama is no dove — and, if anything, he has simply continued the national security strategy of the previous administration — he is viewed as weaker on national security by default for being a Democrat. He has done a good job of giving his critics very little ammo on this front, though, and by and large the “Obama is a weakling dove” meme hasn’t taken hold, because Obama’s policies haven’t given the media any chance to spin him out as a coward who won’t use force when it’s require. However, the “Obama is an Anti-American Islamosocialist” meme is out in full force, and it polarizes any political issue that touches on Islam.

In fact, 1 out of every 5 Americans believe Obama is a Muslim. And if you narrow the sample down to Republicans, a whopping 1 in the 3 believe he is. This is stupidly, crazy high.

And in an America where nearly 20% of the population thinks their president is a “secret Muslim,” there is less room for tolerance and nuance in political messaging. I do suspect that the fact Obama is president is a large part of why — compared to eight or nine years ago — expressions of anti-Muslim sentiment have increased and been met with greater acceptance, and I suspect it is also why the Ground Zero Mosque controversy came to exist at all. 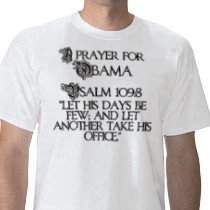 The latest popular religious-political brouhaha to erupt involves a new conservative slogan, which is being featured on bumper stickers, t-shirts, coffee mugs, and other items of internet kitsch. The slogan is, “Pray for Obama, Psalm 109:8.”

On the face of it, Psalm 109:8 does seem like an appropriate sentiment for a right-leaning Christian to pray for God to bring onto Obama: “Let his days be few; and let another take his office.”

But the slogan might be worth reexamining when taken with the rest of the text of Psalm 109:

6 Appoint an evil man to oppose him;
let an accuser stand at his right hand.

7 When he is tried, let him be found guilty,
and may his prayers condemn him.

8 May his days be few;
may another take his place of leadership.

9 May his children be fatherless
and his wife a widow.

10 May his children be wandering beggars;
may they be driven from their ruined homes.

11 May a creditor seize all he has;
may strangers plunder the fruits of his labor.

12 May no one extend kindness to him
or take pity on his fatherless children.

13 May his descendants be cut off,
their names blotted out from the next generation.

14 May the iniquity of his fathers be remembered before the LORD;
may the sin of his mother never be blotted out.

15 May their sins always remain before the LORD,
that he may cut off the memory of them from the earth.

Bible verses are often quoted in a way that obscures or sanitizes the meaning if taken in context, and the vast majority of the time the “true” meaning is adamantly not implied or suggested by whoever is using the quotation. However, while undoubtedly some people purchasing the Psalm 109 products do so with unawareness of the double meaning, I do not think all who advocate the slogan’s use do so in good faith.

People are defending the “Pray for Obama Psalm 109” slogan even after being informed of the larger and more sinister context of the verse. Those in favor of the slogan argue that they don’t mean the slogan “like that,” so the shirts are merely expressing a benign sentiment. However, what this argument basically boils down to is that it is acceptable to deliberately spread about misinterpretations of the Bible and to obscure the true meaning of God’s word. Somehow, I don’t think that argument is entirely coherent with certain other Biblical passages.

At least one online company has announced it will no longer sell Psalm 109 shirts, although when I checked earlier, the shirt pictured in the image above was still available for purchase. Zazzle says:

Obama’s speech on Saturday annoyed me, but it was a subdued, anticipated annoyance. Everyone knows Obama’s done jack all for gay rights and he has no plans on immediately addressing the issue. The only semi-firm commitment he made was to not let his nominees or appointees lose their jobs on the basis of opposition to their sexual orientation — and if he actually keeps that pledge, well, it’s a start.

But this whole hoopla over the “internet left fringe,” no matter how significant the misstatement truly was or whether it was just an extremely clumsy paraphrase by NBC’s Harwood, set me off like dry tender. And apparently it had the same effect on all those pajama-clad bloggers.

Man, Obama is good at this whole “let’s be candid” thing. See, he’s admitting, indirectly, that he’s been a little slow; he’s softening the blow for when his detractors introduce that irrefutable criticism. And, “It’s not for me to tell you to be patient,” Obama acknowledges. He’s not counseling patience — in a round-about, politician-speak way, he’s telling supporters of GLBT rights that they need to keep doing their thing and not sit around waiting for Obama to get on board. Because it is more efficient for him if he waits for a more opportune time to set his sights on the issue.

The problem is, the problem has always been, gays have no where else to go. They can’t redirect their monetary donations, they can’t start voting against the Democrats — because their only other option is a party that has made clear its choice to court the vote of those motivated by fear and prejudice rather than of those motivated by a desire for equality and human rights. So no matter how much Obama fails to come through for the GLBT wing, he knows — they ain’t going anywhere. Most people aren’t going to vote for someone who denies their equal dignity as a human being, just to make a political point.

Sure, they can reduce funding and grassroots support, but that’s a cost he is clearly willing to accept.

And you know what, I get it. I really do. Obama’s got a giant agenda, and a limited amount of time to do it. There are certain temporal orderings of the issues to be addressed that will allow more overall to be accomplished.

And I don’t necessarily disbelieve that Obama fully intends to come through on his promises — some day. But he has deftly avoided providing any sort of a time table he can be held accountable to, and if I had to guess, plans on making this a cause to take up when/if he’s a lame duck in his second term. By then, not only will there be less political risk for him, but the voter support for such a move will almost certainly have increased as well.

But that’s seven goddamned years away. I liked the fierce urgency of now better.