I have no interest in wading into the global warming debate, and for purposes of this blog (or at least this post) I am happy to remain entirely agnostic as to whether its happening or what the causes would be. The whole “yes it’s real” “no it’s not” “is too!” “is not!” discussion just doesn’t appeal to me.

That said, I find one argument that is commonly advanced by climate change skeptics to be about a hundred times more aggravating than any other argument made by either side of the issue. And that is the “gee, it’s cold out there, so much for global warming!” meme.

First, the joke is very plainly not funny any more. If Global Warming Is Real Then Why Is It Cold offers a collection of a few hundred or so political cartoons containing variations on the same tired theme. Oh, and, DeMint? Senator Jim Inhofe already beat you to it, and at least his take is marginally more clever.

But second, and more importantly, much like the beliefs of creationists and anti-vaxxers, the belief that an unprecedentedly cold winter disproves some form rapid global temperature change is so asinine, it feels almost like a personal affront that anyone could believe something so stupid. Weather is the stereotypical example of a complex system; we are not yet capable of predicting with any long rage accuracy the effects of one weather system on another. To take the most common example, we know that El Niño, for instance, can cause Canada to be drier, South America to be rainier, the northern part of the U.S, and the Southeastern states to be colder. A single weather input can cause a wide variation in weather outputs elsewhere in the world — we wouldn’t expect to see a uniform, unidirectional change.

This may in itself be an argument against the reliability of any research on the long term effects of global warming, but its even more of a reason to discard the idea that an extreme and unprecedented weather event is an indication that things are business as usual with the world’s climate.

I went to the program ASIL had yesterday on “Rights-Based Responses to Climate Change Induced Displacement,” which discussed the role of international law in handling ‘environmental migrants’ and internally displaced persons who are forced out of their homes as a result of conditions brought on by climate change. One of the speakers brought up an interesting scenario I had not considered before.

Rising sea levels may pose a serious risk to the national security of many island nations. For states such as the Bahamas and Tonga, a higher sea level is a grave threat, as the low lying parts of their territories that are at the greatest risk of going under tend also tend to be the areas of greatest habitation. But for other island nations, such as Kiribati, the Marshall Islands, the Maldives, and Tuvalu, climate change may pose a more severe and existential threat: these states may actually be at risk of becoming entirely submerged by rising sea levels. If these island states were to become completely swamped so that no part of their islands were above sea level, effectively leaving them with no physical territory to call their own, would they continue to exist as an entity recognized by international law? 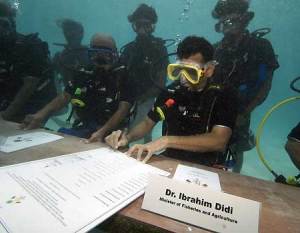 Prof. Kälin mentioned the possibility of citizens of these at-risk countries becoming “stateless” if their islands go under. But statelessness, as he put it, could mean being without a nationality, not being without a state.  Even if an island nation were swamped, it does not necessarily imply that its government would not continue to exist.

Under international law, the traditional criteria for statehood does include “territory.” However, would such a formalist interpretation prevail after a climate related disaster sunk a whole nation? Or, in practical terms, would any state really have the callousness to stand up and announce, “It is unfortunate that the Maldives was submerged by rising sea levels, but we now object to its continued claims of statehood and UN Membership”? Maybe I am being too generous, but I doubt it.

There is also the possibility that any sunken nation could build up a tiny sandbar over the remains of their country, if the technical requirement of territory is found to be mandatory. There is no requirement that a state’s government be located within its own territory, after all — merely that a state have some territory to speak of, even if the seat of government is not located there. For instance, the internationally recognized governmental body of Somalia has at times operated out of the neighboring territory of Kenya, due to the unstable situation inside of Somalia itself.

Additionally, although the concept of statehood as a corporate-esque abstraction — a social construct characterized by its citizens voluntary allegiance, with little or no regard for the geograpgical location — has been a somewhat common trope in science fiction, there is in fact some modest precedent for the idea under international law. The Order of Malta, for example, has no territory of its own, but it claims to be a non-state sovereign entity, and has permanent observer status with the UN. It has diplomatic relations with 103 states, and even issues its own currency and stamps. Although most international scholars reject the notion that the Order of Malta is an “actual” sovereign entity, it clearly does exhibit some sovereign-like traits in practice.

Perhaps a nation submerged by rising sea levels would face a future similar in some respects to the current status enjoyed by the Order of Malta, although it seems likely a formerly-territoried state would face far less objection to its continued claims of sovereignty. The theoretical underpinnings of statehood have always been forced to evolve and adapt to changing political structures, however; it is not too difficult to imagine a hypothetical future world in which the idea that statehood is dependent upon attachment to a patch of dirt is considered to be archaic.

The Copenhagen Summit is a complex geopolitical issue, one deserving of critical thought and a careful consideration of the viewpoints of all the parties involved. And where better to find such a nuanced discussion of the topic than an op-ed article written by Fidel Castro?

As television channels have broadcast the footage, the world has been able to see the fascist methods used against the people in Copenhagen. The protesters, young people in the main, who have been repressed, have earned the solidarity of the peoples.

The young people in the main later told reporters, “Come and see the violence inherent in the system!”

Despite the manoeuvres and unprincipled lies of the leaders of the empire, the moment of truth is drawing closer. Their own allies are increasingly losing confidence in them. In Mexico, as in Copenhagen or anywhere else in the world, they will be met by the growing resistance of the peoples who have not lost the hope of surviving.

I’m not certain of it, but I suspect that Castro copied that last paragraph directly out of Les Misérables.