You can see these differences four yourself by comparing Urick’s fax to AT&T requesting authentication of the State’s copies of the cellphone records, and Exhibit 31 as it was admitted at trial. To show the differences between the two documents, I’ve provided below a side-by-side comparison of each page. (Note that the substantive records begin at Page 2 of Exhibit 31; the first page is the affidavit from AT&T’s custodian.) 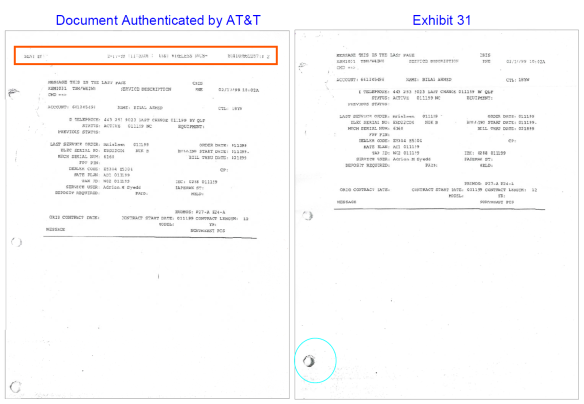 In Exhibit 31, the top line has been chopped off, and the entire page has been shifted upwards — including the hole punches on the left-hand side, which are now noticeably higher than those on the authenticated copy.

The third page of Exhibit 31 is the last page AT&T’s 2/22 fax, containing part of the phone records for January 12, as well as blank entries for phone records from January 9 – 11 (prior to the phone’s activiation). On the left side of the document faxed by Urick to AT&T, the edge of the original fax header is visible, while it has been removed from the copy submitted as Exhibit 31.

The fourth page of Exhibit 31 is the second to last page of AT&T’s 2/22 fax, containing part of the January 14 records, all of the January 13 records, and the beginning of the January 12 records. In Urick’s fax to AT&T, the fax header information has already been almost entirely cut off (although it remains present in the prosecution’s other copy of the January 13 records from the 2/22 fax). However, because the original fax from AT&T was slightly askew, the border of the fax header information is not parallel with the page’s text, and runs off at a ~15° angle. In the corresponding page from Exhibit 31, this has been corrected with the help of a paper guillotine; however, because of the angle required to even up the page, the sheet of paper was no longer a rectangle, and copies made from the cut sheet show where fax header side was cut off (circled in blue, top right of image). 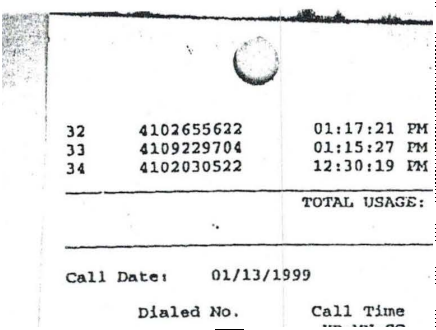 The shadow from where the paper is lying on the copier glass is visible, demonstrating that the corner is not at a 90° angle.

The fifth page of Exhibit 31 is the third-to-last page of AT&T’s 2/22 fax, containing the beginning of the January 14th records and part of the January 15th records. In Urick’s fax to AT&T, a recognizable portion of the fax header information line is present:

However, in the document submitted as Exhibit 31, the fax header has been removed, and the entire page has been repositioned so that the text is angled correctly.

To break down how this happened, and why this switch went unnoticed at trial, it helps to review a timeline of events resulting in the creation of Exhibit 31:

But the prosecution’s motives in making the switch are irrelevant. An inadvertent failure to disclose exculpatory information has the same constitutional effect as a deliberate failure. Here, regardless of motive, the result was the same: although the genuine certified business records had information which plainly identified them as copies of a faxed document, the counterfeit version did not. A reasonable attorney reviewing Exhibit 31 — such as, say, the Deputy Attorney General of Maryland — could very reasonably conclude that,

“Indeed, the ‘Subscriber Activity’ reports [sent by AT&T] were neither identified as exhibits nor admitted into evidence. What was admitted into evidence were cellphone records accompanied by a certification of authenticity, signed by an AT&T security analyst, and relied upon by the State’s expert who himself was employed by AT&T as a radio frequency engineer.”

However, contrary to the State’s claims in its recent briefing before the trial court, what was admitted into evidence (1) was a subscriber activity report, and (2) was not a certified business record authenticated by AT&T, but instead a different copy of the phone records that was missing information present in the genuine copy. This isn’t just a case questionable corner cutting by the prosecution that has no practical significance, however. If the instruction sheet is determined to be material and exculpatory evidence by the court, this was a Brady violation. Even had Gutierrez known that AT&T sent the instruction sheet along with all of the billing records that it faxed over — which she didn’t, because the prosecution did not disclose those records to her — Gutierrez still had no reasonable way of knowing that Exhibit 31 was itself a document faxed to BPD by AT&T, to which the instruction sheet applied. The fax headers identifying the origins of Exhibit 31, and directly linking the records to the instruction sheet, had been eliminated, even though that information was present in the genuine copy of the records authenticated by AT&T.

20 thoughts on “Exhibit 31 Was Not a Certified Business Record”