In yesterday’s bonus episode of Undisclosed, I mentioned that I agreed with Colin about how Jay’s borrowing of Adnan’s car and phone appeared to be directly tied to their involvement in weed dealing, and further that, based on the calling patterns from the cell records, it appeared that Jay had been regularly borrowing Adnan’s car/phone on Wednesdays during the time that Adnan should have been at track. Since I’ve gotten a few questions about it today from listeners curious about it, I figured I’d put up a quick summary of the records I’m referencing.

First off, though, I should note that any “drug dealing” at issue would be the type of “drug dealing” that necessitates the use of scare quotes — there is no suggestion that anything more serious was going on here than teenagers providing pot to other teenagers. Moreover, based on Jay’s statements in his first police interview, whatever he was involved in was clearly some small time stuff, based on the total dollar amounts involved: 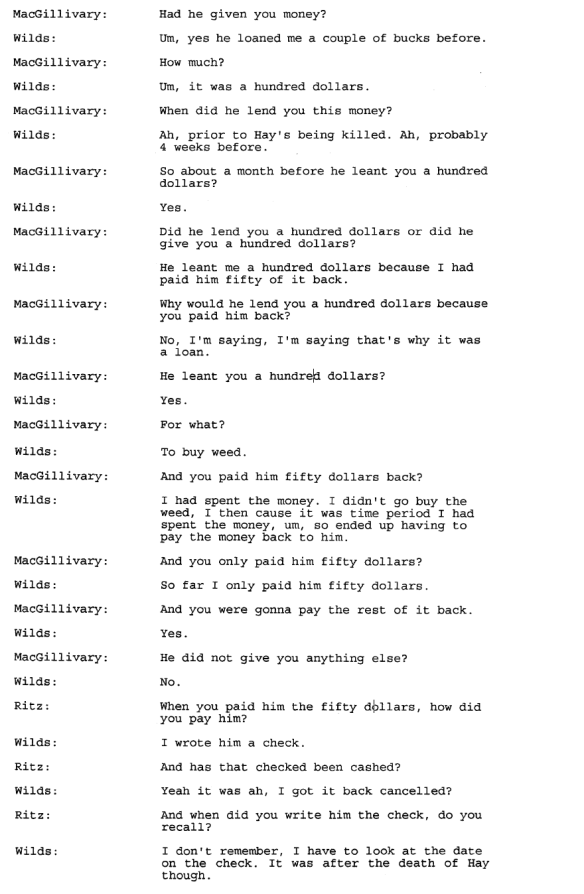 (Side note: I wish the police had actually gotten a copy of this check, but I guess they knew it looked really bad for their “Adnan blackmailed Jay into helping with a murder” story.)

So with that in mind, here’s what the phone records show:

Days on which Adnan should have been at track practice, but between 3:30 and 5:00pm there were calls made to NHRN Cathy (who was Jay’s friend, and did not know who Adnan was):

Days on which Adnan’s phone made calls originating on either L689B (a.k.a. “the Leakin Park tower”) or L653C (tower on Edmonson Ave., south of Leakin Park):

Weed dealers (a) who sold weed to Jay; and (b) who, according to AT&T’s maps, Jay had to drive through L689B and L653C’s coverage areas in order to get to their houses:

Woodlawn HS depicted top left. Leakin Park is the grassy area to the center/right of image. Cell towers are marked by triangles. Blue line marks Cooks Avenue, which is mentioned repeatedly in Jay’s stories, and which both L653C and L689B could provide coverage for.

You can draw your own conclusions as to what else this pattern of activity may represent, but it does show that Jay being in possession of Adnan’s phone on a Wednesday afternoon during track practice would not have been an unusual event during this time frame.

1 Adnan got his cellphone on January 12th, and available cell records run through February 18th.

Additionally, I’ve only considered here the time period from January 12th – February 5th, due to the fact that Adnan does not appear to have regularly attended track practice following that date. The track meet on January 28th was the last regularly scheduled competition, and although the track season technically continued after, only the school’s top athletes would be competing in the remaining championship meets, Adnan not among them. So although Adnan continued to make sporadic appearances at practices following the last regular season meet, his attendance is reported to have significantly dropped off and it does not appear he went much or at all after the first week of February.

3 Per a track coach interviewed by the detectives, students who had missed school were not eligible to participate in athletics programs that afternoon. Adnan was out of school for a religious holiday on January 19th, and marked as absent on the 25th. He is also marked as absent on February 4th according to one record, but no absence is marked on another, so it’s not completely clear if he was eligible for track that day.

4 January 26th and February 4th also show some activity during these time periods, but not activity would be inconsistent with his attendance at track on those days, so I’ve not included them on this list. On January 26th, there was a call to check voicemail at 4pm, and on February 4th, there was a 10 second call to Adnan’s friend Peter at 4pm. Both calls were on towers that would be expected for a call made from Woodlawn High School.

106 thoughts on “A Follow-Up Post On Cellphone Borrowing, Track Practices, and Wednesdays”