There is a four-way race for the position of D.C. Delegate this year. That seems like a lot of competition, given that the position they are running for is basically just an opportunity to audit the role of congressional representative. Eleanor Holmes Norton, the current Delegate, is guaranteed to keep her post, and she is by far the most well known of the four candidates. One of her opponents this year, Missy Reilly Smith, is getting some publicity, though, for her gross-out campaign videos — which were so bad they got banned from YouTube. A third candidate is Rick Tingling-Clemmens, who is running on a Statehood platform, and also has an awesome name.

And then there is Queen Noble, the Dark Horse of this year’s Delegate race. Noble is running as the candidate for the H.E.R.O.S.H.E.R.O. party:

I am here for my babies kidnapped by kat sabilous department of social services and the department of children and family services in Hollywood, ca. I am Queen GIVE ME BACK MY KIDS Noble, I have 994 trillion law suit active in the us supreme here in dc against this government currently aiding and abetting smith’s kidnapping of my kids in this stolen country. Prima Facie discovery Evidence is proof of target victimization for life and robbed of my family.

H.E.R.O.S.H.E.R.O., by the way, stands for “Helping Equal Rights Opportunity & She’s Helping Equal Rights Opportunity.” That’s from a Missouri Ethics Disclosure Report. But if you want to call Queen Noble, you may be out of luck. Under Committee Telephone Number, she writes “noble hates phones, write something using your racial postal system (see maxine “crack cocaine” waters 35th Dist. SCla. ca)”. To paraphrase the words of a great man, what does this all mean?

It might also be worth pointing out that her campaign expenditures include black-eye peas and corn muffins.  Her previous ballot initiatives include “Bible Belt My Ass.” 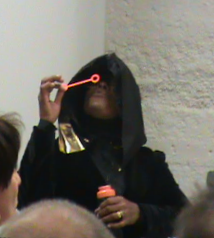 Perhaps unsurprisingly, this is not Noble’s first election campaign. She has previously run for Mayor of Cincinnati. In that race, she listed her education as “Jim Crow/George Wallace”, and stated that her qualifications for office were that she is, “Currently a presidential candidate running for the Mayor of Cincinnati 3 times candidate for President 5 times for City Mayor Candidate Congress and City Council Candidate once”.

Here is one of her position papers:

She has also filed a $994 trillion dollar law suit against the Stolen United States of America, Does, Kenneth D Lewis, Bank of America and Skid Row Housing Trust.

Now here is where the story gets truly surprising: in 2009-2010 alone, Queen Noble’s campaign apparently received $17,000 in political donations from various PACs.

So Aflac, Bayer, and a few other boring corporate organizations are reported as having given money to Queen GIVE ME BACK MY KIDS Noble. As is Free and Strong America — a Leadership PAC run by Mitt Romney.

And in 2003, she did even better, receiving over $30,000 total in contributions — including $5,000 from Emily’s List. Apparently Johnson & Johnson, Circuit City, Pepsi, Sears, and the Gap all had their PACs give to her, too, plus there were repeat contributions from alcoholic beverage trade association PACs.

Except at this point, I am kind of suspicious about the accuracy of Congress.org’s data on PAC contributions. This can’t be right, can it? I haven’t figured out where exactly Congress.org got its data, and no other site seems to list these contributions, so maybe people are not giving money to Queen Noble’s campaign after all — I hope not, anyway.

2 thoughts on “Are PACs Donating to Queen GIVE ME BACK MY KIDS Noble?”