I was driving up the GW Parkway this morning, and as I was going around one of the bends near the scenic overlooks, a giant bald eagle swooped right in front of me. (It was roughly the size of a small horse.) It glided over the cliff, heading across the river, and I am probably lucky it did not cause me to wreck. I watched it as far as I could, mostly to make sure I was not imagining it. But nope, definitely a genuine, in-the-feather version of our national bird.

I am pretty sure the only thing more American than a bald eagle fly across the Potomac (on a road named for George Washington, no less) would be eating a Big Mac and an apple pie while watching a reality TV show.

About a quarter mile down the road, I saw a second bird, from farther away, that I think may have been a juvenile bald eagle. The coloring was all wrong for any of the hawks in the area, and the shape did not look like a vulture, so who knows.

A quick Google search showed that there are actually quite a few bald eagles in the area — including 20 nesting pairs along the Potomac — and in 2009 a pair was even nesting in the median on the GW Parkway. There is even a photo gallery dedicated to George Washington Memorial Parkway Bald Eagles. So I guess I should have been less surprised to have seen one this morning and more surprised that I had not seen one before now.

Maybe the first eagle I saw was either Alex or Belle, a pair that seems to have nested in the area last year: 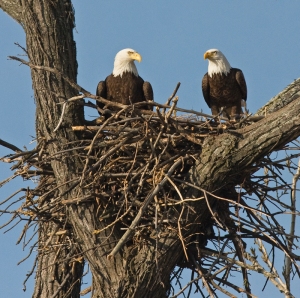 [Edit: I am pretty sure I have located the eagles’ nest. If you’re heading southbound on the GW Parkway, just where the entrance ramp for Spout Run comes into the Parkway, their nest is on the left in the median, maybe ten feet down from the top of the trees. It’s pretty hard to miss once you know where to look.]

5 thoughts on “Bald Eagles on the George Washington Memorial Parkway”