This is apparently very old news, but I’ve never heard of it before. U.S. laser printer manufactures have, in cooperation with the federal government, included special tracking dot systems with their printers, so that every page printed contains hard to see dot patterns encoding the serial number of the printer and the time and date that a given page was printed.

The dots’ minuscule size, covering less than one-thousandth of the page, along with their color combination of yellow on white, makes them invisible to the naked eye, Crean says. One way to determine if your color laser is applying this tracking process is to shine a blue LED light–say, from a keychain laser flashlight–on your page and use a magnifier.

The best website up about the tracking dots is over at the Electronic Frontier Foundation. The EFF has sent in a FOIA request for information on the program. So far, they say,

“[the] [d]ocuments we’ve begun to receive in response to our FOIA requests suggest that the government may have convinced all printer manufacturers to put some kind of tracking mechanism in every color laser printer.”

The EFF has discovered the key to the tracking dot code, as shown in the picture here. They reveal the printer serial number and the exact date — down to the minute — of when the document was printed. 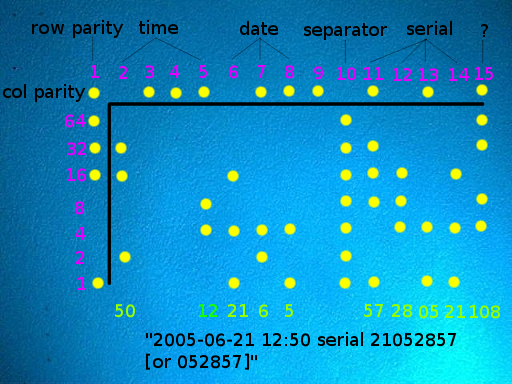 The Secret Service seems to be the agency that convinced printer companies to include these dots patterns. An anti-counterfeiting agent has stated that, “The only time any information is gained from these documents is purely in [the case of] a criminal act,” but there are no statutes actually limiting their use in any way.

Printing companies, like Xerox, assist the government in using the dot patterns. In the course of an investigation, the Secret Service

“decodes the information contained in the dots only to investigate counterfeiting cases. Once it has the serial number of the printer, the agency can work with printer companies to find out where the printer was sold.”

However, counterfeit investigations are only the tip of the iceberg for potential uses of the tracking dot system.

The EFF, and most other sites with information on the dots, seem primarily concerned with privacy concerns regarding government abuse of the tracking data, which is certainly a valid issue. But the first thought I had was the potential value of tracking dot information for private parties, especially for use in civil litigation. I was hoping to find an example out there of a case where tracking dots were used as evidence to either establish when a document was printed or who did the printing, but I couldn’t turn one up. Still, this seems like it’d be such an insanely useful information bonanza that there’s not way it could have not been used in litigation at some point. I’m going to scout around some more this afternoon, and if I find any cases where they were used, I’ll put them up.

Off the top of my head… Potential cases where tracking dot data might be invaluable would be, for instance, contract cases where there are allegations additional pages have been substituted in the contract, or family law cases where maybe one party is alleging they have a threatening not sent by another party, or employment cases where an employee is alleged to have engaged in improper conduct at work where printing was involved. There are thousands of cases where it might come in handy.

On a final note, because this is LL2 and because in my world essentially every subject can and should be linked to international law, there may in fact be some international law implications here as well. According to the European Parliament,

To the extent that individuals may be identified through material printed or copied using certain equipment, such processing may give rise to the violation of fundamental human rights, namely the right to privacy and private life. It also might violate the right to protection of personal data.